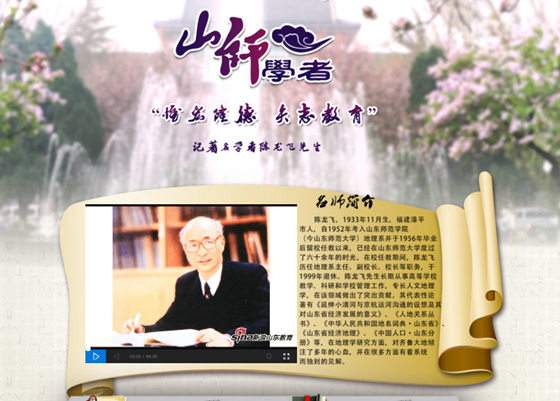 ChenLongfei, born in November 1933 in Zhangping,Fujian Province,was admitted to the department of geography of Shandong Normal College (now Shandong Normal University)in 1952 and started teaching after his graduation in 1956.Since then, he has spent more than sixty years in Shandong Normal University. During his teaching in SDNU, Chen Longfei has successively held the posts of the director of the department of geography, vice president and president of SDNU, and he retired in 1999. Mr. Chen Longfei has been engaged in teaching, scientific research and university management for a long time.He specialized in human geography and made outstanding contributions in this field.His representative works are "The idea of extending the link between Xiaoqing River and Beijing-Hangzhou canal and its significance to the economic development of Shandong Province", "Human land relationship series" , "People's Republic of China geographical name dictionary, Shandong Province,""Economic geography of Shandong Province", "Chinese population , Shandong section".In his geography research, he devoted many years to the land of Qilu, and had a systematic and unique view in many aspects.