The Seminar on the Historical and Cultural Documentary "Jixia Academy" Was Held in SDNU.

Wan Guangxia extended warm welcome and heartfelt thanks to all experts and scholars for their guidance, and briefly introduced the basic situation of SDNU.

Wang Zhimin pointed out that the documentary had a good topic selection and grasped the special historical and cultural phenomenon of Jixia Academy; positioning the Jixia Academy as a university, highlighting its academic nature. It standed high from the perspective of world civilization. Jixia Academy is regarded as the only academic center of hundreds of scholars in the Warring States period.Besides, with a historical perspective, the development of Jixia Academy was put into the whole history of the Warring States period, deepening the theme. What's more, the organic combination of thought and image had good artistic effect.

Li Jiuhong, vice general manager of Shandong Film and Tv Group, introduced the planning, shooting and production of the documentary.

“Jixia Academy” was broadcast on Shandong TV on February 28thand received attention and praise from all parties. 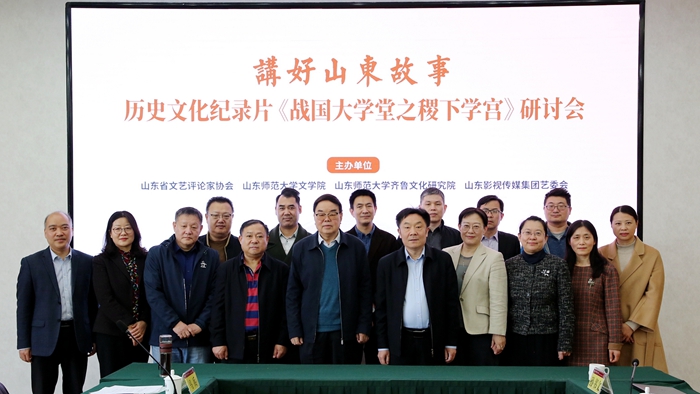