On September 9th, Tang Bo, secretary of the party leading group and director of the Science and Technology Department of Shandong Province, Yu Hongwen, deputy director, and the delegation came to Changqinghu Campus to investigate scientific and technological innovation work and held a forum to extend festive congratulations to all teachers and educators on behalf of the Provincial Science and Technology Department. Tang Zhouyan, Zeng Qingliang,Man Baoyuan and Wang Chuankui attended the meeting. 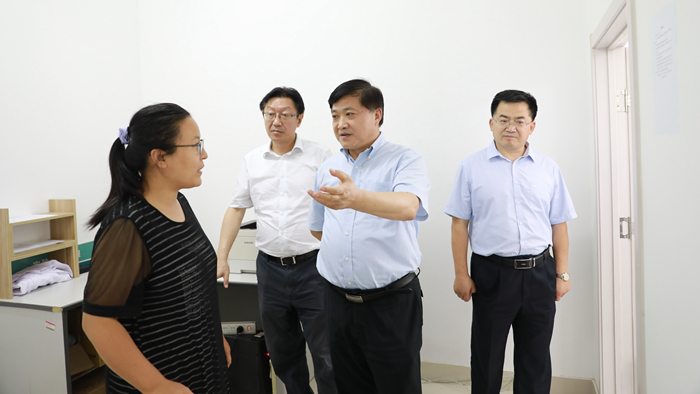 Tang Bo successively visited the light field control of Shandong Province, the Institute of Water Ecology, and the Psychological Laboratory of the School of Psychology, and held a research forum.

Tang Zhouyan welcomed Tang Bo and his delegation and thanked the Provincial Science and Technology Department for the care and support for a long time. He pointed out that the Provincial Department of Science and Technology, as the department in charge of scientific and technological innovation in the province, has always been very concerned about the development of SDNU. On the occasion of the 36th teacher's Day, Director Tang and his delegation paid a visit to SDNU,which fully demonstrated the care and support of the Provincial Department of Science and Technology. He stressed that SDNU will speed up the promotion of scientific and technological innovation, the integration of science and education, and make new and greater contributions to the construction of a modern and strong province in the new era.