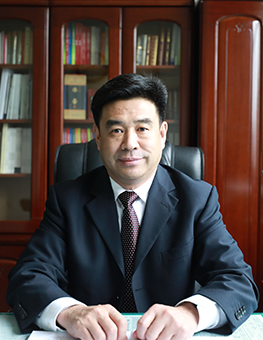 Zeng Qingliang,President and Deputy Secretary of the Party Committee of Shandong Normal University

Zeng Qingliang, Han Nationality, born in January 1964 from Gaomi, Shandong Province, Chinese communist party member,  professor of the second grade, doctoral supervisor. He is currently President and Deputy Secretary of the Party Committee of Shandong Normal University and he takes charge of the overall work of administration. He is responsible for the work such as development planning, discipline construction, audit, he is in charge of the president's office, department of development planning and discipline construction, audit department.

He graduated from China University of Mining and Technology (Beijing Campus) in 2000 with a doctorate degree in mechanical design and theory, from 2001 to 2002 he was engaged in post-doctoral research in control theory and control engineering, Department of Automation, Tsinghua University. He used to work in Shandong University of Science and Technology, successively he worked as the director of the School of Mechatronical Engineering, the director of the Graduate School, the director of the Graduate Affairs Office, the Standing Committee of the Party Committee and the vice-president of Shandong University of Science and Technology. He is the National Candidate for Millions of Talents Project, receives a special government subsidy of the State Council. He is a young and middle-aged expert with outstanding contributions to the country, he is also an expert in the progressive plan of Taishan Scholars in Shandong Province, he is also head of Shandong Coal Safety and Efficient Mining Technology and Equipment Collaborative Innovation Center, director of the Shandong Key Laboratory of Mining Machinery, director of Engineering Technology Center of Mining Machinery in Shandong Province. He is also vice chairman of Mine Machinery Branch of China Construction Machinery Society as well as the vice chairman of Shandong Mechanical Engineering Society.

He is mainly engaged in scientific research in mining machinery, hydraulic transmission and control, advanced design and manufacturing technology and other fields. He has taken charge of more than 60 research projects including the National Science and Technology Supporting Plan, the National 863 Plan, the National Natural Science Foundation, Major Projects of Shandong Science and Technology Development Plan, the Outstanding Youth Fund of Shandong Province and Enterprise Cooperation. He has published more than 150 papers in Eng. Fail. Anal., P. I. Mech. Eng. K-J. Mul., Int. J. Simul. Model. and other academic journals at home and abroad, including more than 60 papers in SCI and EI. As the first inventor, he has obtained more than 20 international and domestic invention patents. As the first accomplishor, he has won one second prize for national scientific and technological progress and two first prizes for provincial and ministerial scientific and technological achievements. He has cultivated 18 doctoral students and 50 master's students. The postgraduates he supervised have won excellent doctoral dissertations and master's dissertations in Shandong Province.